In honor of the new Twilight movie, Breaking Dawn Part 1, here are my Edward Cullen nails! I am taking my step daughter to see the movie on Friday. She is beside herself with excitement. I am a Team Jacob girl myself, and I will share those nails here tomorrow. This manicure takes some inspiration from Robin Moses who did a spot on Edward Cullen mani a while ago. Check her version out by clicking here. 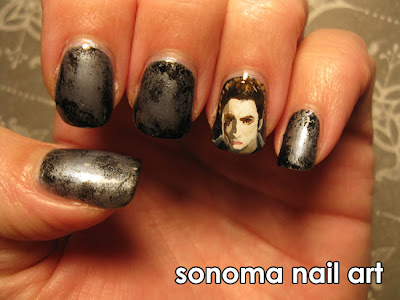 As my husband would say (in a falsetto voice), "Oh Edwin!" He also likes to refer to sparkle vampire #1 as Edgar. It drives his daughter crazy. :) 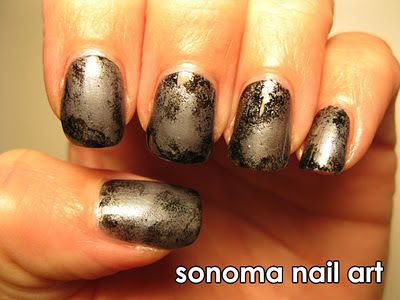 I started with a fun base of a pearly blue polish, then sponged some steel colored polish around the edges and finally sponged some black on it as well. I was going for a grungy/moody feeling like the dark pics of Edward Cullen on the movie posters. 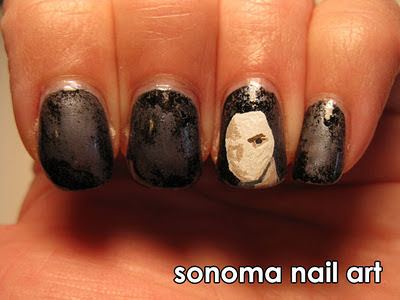 I mixed white and silver acrylic paints to give Edward's skin a subtle sparkly sheen. You can kind of see it in person, but it doesn't translate on these pics. 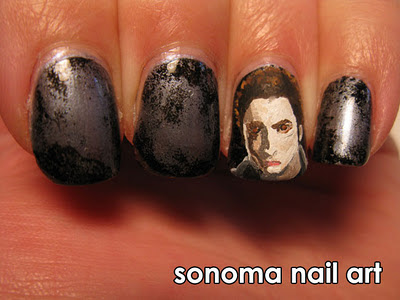 After I took this pic, I realized that Edward needed more highlights in his hair. It looked way too much like an afro in this pic. Which could be a good look for him... 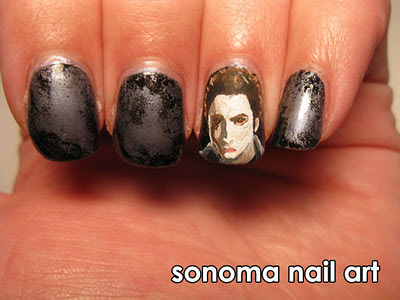 There's the mussy bed head we all know and love! 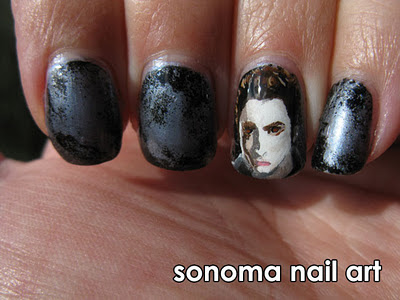 I took this pic in the sunlight, hoping it would show off the sparkle in his skin a bit more. No, not really. I also added his little pea coat. Edward is so stylin'! Looking at these pics closeup, I realize I should have tried to add pupils to his eyes, but honestly, you can't tell in real life. His eyes are TINY. 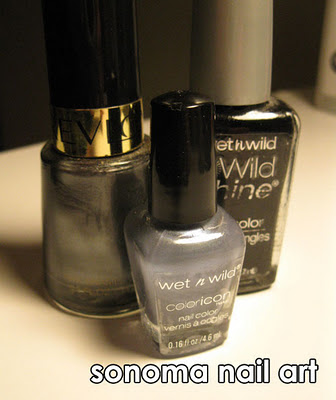 Polishes used in this mani: Revlon Steel-her Heart, Wet n Wild Black Creme, and a mini un-labled Wet n Wild, though I am pretty sure it is Rain Check. I also used Essie All In One Basecoat, and topped it all with Seche Vite topcoat.
And finally, I have a REALLY BIG FAVOR to ask you, my lovely followers! I have entered the OPI Muppets Madness contest with a manicure of Miss Piggy. I cannot post a picture of it here, since the rules specify that it cannot be published anywhere else, other than the contest page. If you have facebook, I would really appreciate you taking a look and please vote for my mani: PIG POWER by Michelle Marques. Thank you soooo much! Here is the link to my entry. Voting ends on Sunday.
Posted by Sonoma Bento at 3:23 PM