When OPI was hosting their Muppets Mani Madness contest, I was prepared to take on every week of the challenge until I won the dang thing! Luckily, I won during the second week of the contest with my Fozzie the Bear manicure. But I had this design up my sleeve in case I needed it. And I really wanted to do it, so I finally did the design this past weekend. I think it ROCKS! 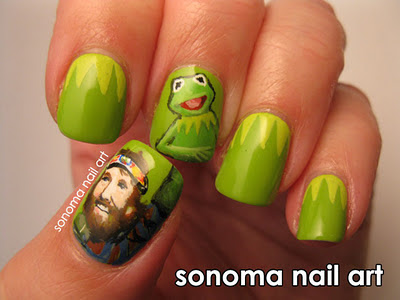 It's Kermit the Frog with Jim Henson below him, operating the puppet. You can see Jim's arm extends up on my nail, so it looks like he is operating Kermit. Waaaaaaahhhh! (That's my Kermit impression, waving my arms in the air and yelling!) 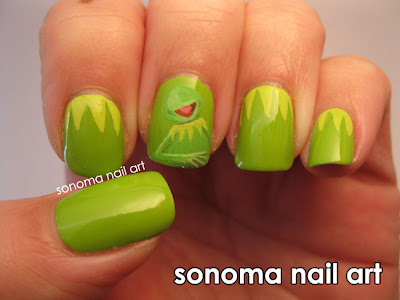 I started with a base of Sally Hansen Insta-Dri in Lickety-Split Lime. This color nearly matches Kermit perfectly. Then I added the little neck collar in acrylic paint to a few of the nails. It's kind of a half moon manicure, and this design would be super fun on its own. Then I started in on Kermit himself. I thought about starting with black acrylic paint for the shape of Kermit, but I decided to outline him afterwards. 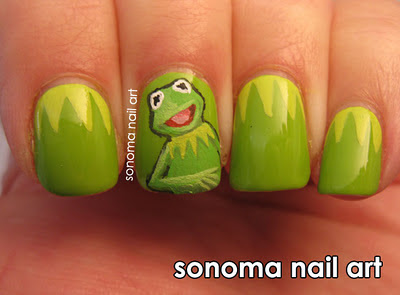 Here is Kermit finished, but not topcoated. As you can see, I changed the size of his mouth a bit and added shading around his collar. The eyeballs were pretty hard to do as they were TINY!! 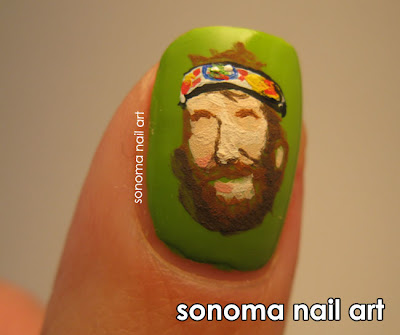 Then I started in on Jim Henson. I used a picture of him I found on the internet with him operating Kermit. He has a great smile in this picture and I really liked it. The puppeteers all wore headbands to hold their microphones near their mouths. Operating a puppet is very physical work, which I found out after doing a puppet version of Hansel and Gretel in high school. Your arms get REALLY TIRED. I think this ended up being one of my better portraits! 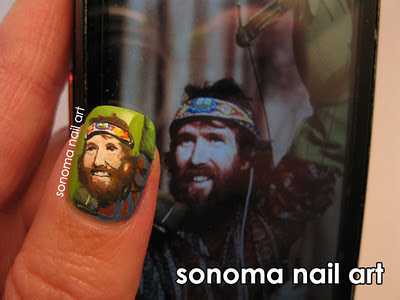 Here's Jim and Jim. You can see I did not spend a lot of time on his shirt detail, but his arm is extended up with the sleeve of Kermit's puppet on his upper arm. The little greenish blob next to his chin is the microphone. 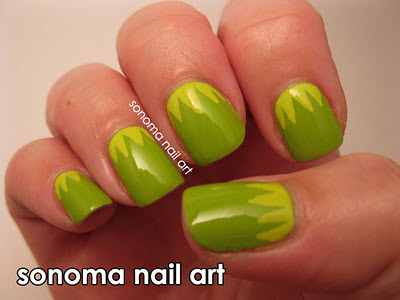 On my right hand I repeated the Kermit collar theme. This was fairly easy to do with my non dominant hand, so I figured it was a good design to go with. 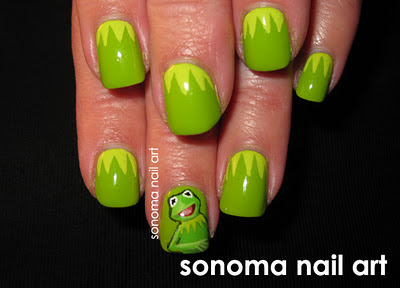 Here are my hands together, so you can see how fun the hands look together. I really love this design and have gotten lots of comments on it so far. 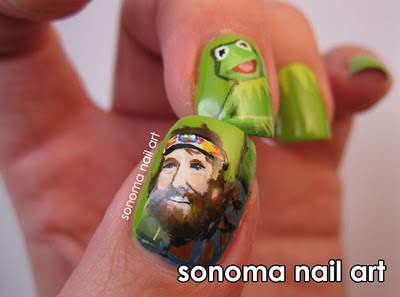