I admit that historical military weapons are not normally the "go to" topic for nail art, but I was fascinated by this bit of American history, so I wanted to share it with you!

My hubby and I recently watched an episode of Weaponology from the Discovery Channel about submarines. And apparently the first military submarine was built to attach British Naval ships off the New York Harbor during the American Revolutionary War. The 'Turtle' was designed to be operated by one man who would use pedal power to propel the craft, and hand pump water in and out of a tank on the bottom of the craft to lower and raise the submarine. They intended to go underneath a British ship, bore a hole in the hull and place explosives there. Unfortunately, the hull was reinforced with copper plates and they couldn't drill through it. The submarine was designed by David Bushnell with help from Benjamin Franklin. Isn't this crazy fascinating?! So I present... The Turtle! 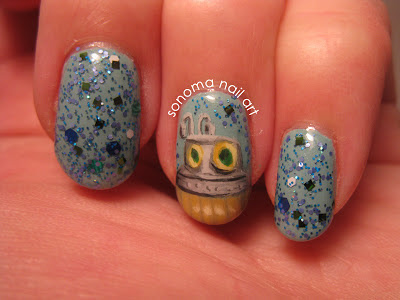 It's so cute, and also terrifying to think of actually being in it. LOL I added a bit of my Sonoma Nail Art polish, "20,000 Leagues Under the Sea" to give it some bling and to indicate the dangerous current and cold waters off of New York Harbor. 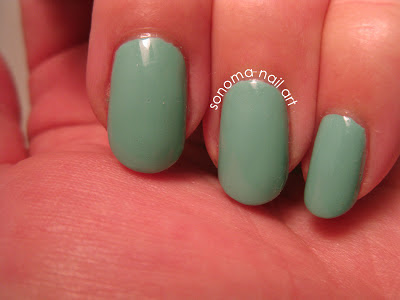 I started with a base of Cult Nails Manipulative for the base color. This is two coats. It is a really pretty polish, but tends to give me lobster hands in photographs. 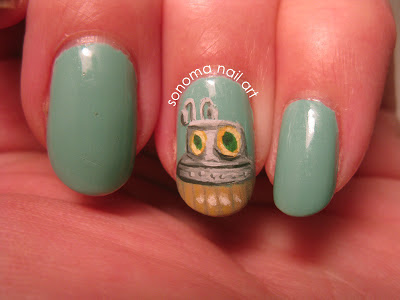 And here is the artwork of Turtle before top coat. I used acrylic paints to make the artwork of the little submarine. If you want to see what the sub looked like and read more about it, click this link.

And if you would love to own your own bottle of 20,000 Leagues Under the Sea, you can purchase it now from my etsy shop. Click here to see the polishes currently available!