Nirvana's album Nevermind was released on September 24th, 1991. I was 18 years old and living in the Pacific Northwest at the time, so you can imagine that I listened to this album a lot. I mean, A LOT. I made out with my boyfriend to it. I did my school work to it. I danced to it. I watched the video for Smells Like Teen Spirit over and over again. So it makes me feel pretty damn old to know that this weekend the album of my youth turns 20 years old. To celebrate the awesomeness of this album, I made this awesome manicure. 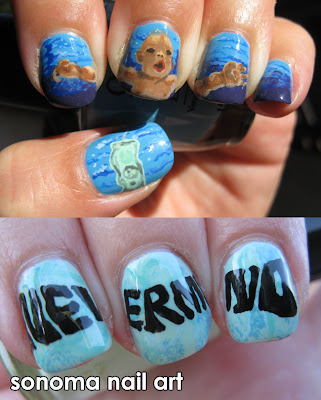 I did the front of the album on my left hand (with a little artistic license, the baby should have the dollar bill suspended near one of his arms...) and on my right hand I did the back of the album with the Nevermind title. 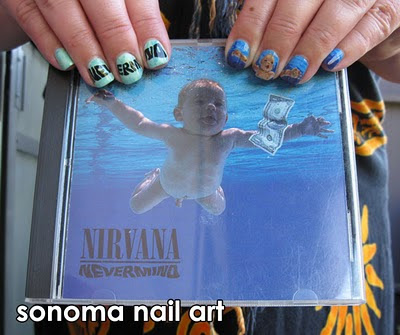 Here's little Spencer Elden, the boy with the most famous penis in the world. I did a bit of research on this baby (who is now 20 or 21 years old) and he is actually an artist with some pretty cool stuff. Mostly pen and ink, some mixed media. I like it! 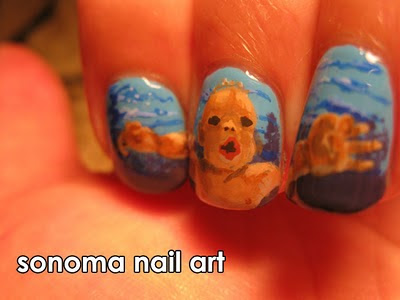 The baby arm on the right side turned out a little bigger than I hoped, but overall I like the effect, especially in this shot. This is lamp light at about 2am. I've got a scratchy throat and I couldn't sleep, so why not try a really complicated manicure instead of sleeping?? 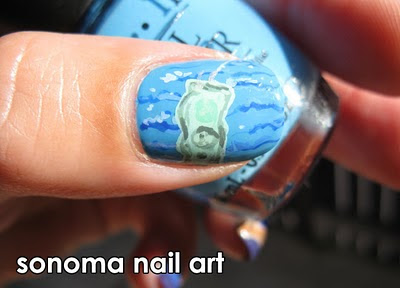 Here's the dollar on a hook floating in the pool. I used acrylic paints for the waves, dollar, baby, and Nevermind title. Base colors were polishes from CQ, OPI, and Revlon. 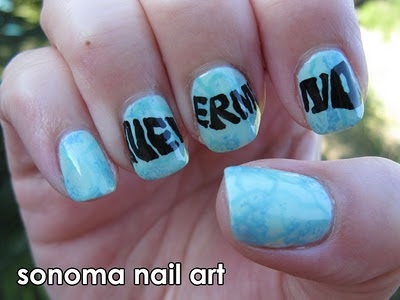 I really like how the underwater pattern turned out. I used a sponge to add some blue to the minty green base polish (which actually helped to cover up a few thin areas) and then added the veiny light refractions with a small paint bruch and acrylic paints. And considering I painted the Nevermind title with my left hand, it turned out pretty damn well. 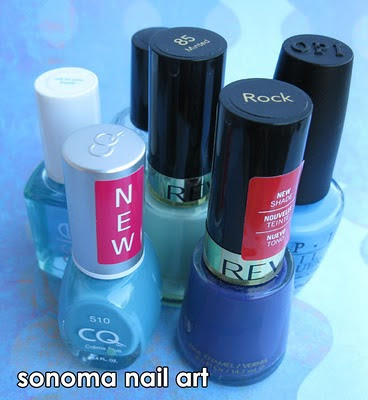 Polishes used: CQ Creme Blue, Revlon Minted, Revlon Rock, and OPI No Room For The Blues. I also used Essie All In One Base and Sech Vite topcoat. I used two coats of the OPI and Revlon Minted for the base of the nails, but the Revlon shade still had a few thin spots. I just covered them up by sponging on the CQ polish. 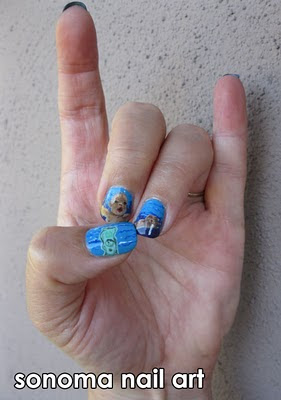 Rock on!
Here is a video that shows how I did the nails in stages. It's not necessarily a tutorial, because I didn't take as many photos while I painted the baby, but you can see how it all came together. I've got to get a tripod and try a true video tutorial soon. By the way, I listened to the Nevermind album 4 times in a row while doing these nails, which gives you an idea of how long it took to do them. :)
I hope you like these! What album was you favorite as a teen/young adult?
Posted by Sonoma Bento at 6:54 PM