So I finally got around to painting my right hand with the other half of the Star Wars design. Like I said, I wanted to do something different than just the faces of different characters from the movies. So I decided to highlight the plight of a little droid who is attacked unmercifully throughout the series: R2D2. On this hand, I portray R2 getting zapped by the Jawas. 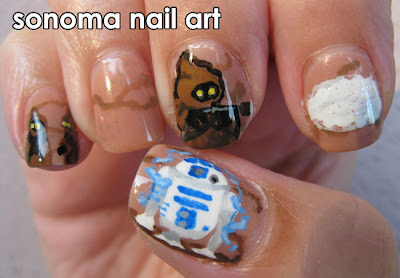 There's a pair of Jawas on my pinky finger, the sand and stones of Tatooine on my ring finger, an evil Jawa shooting his gun on the middle finger, the gun blast on my pointer finger, and poor R2D2 surrounded with zaps of electricity on my thumb. This Jawa means business. (Do you see the sparkle I added to the gun blast? I think it adds a little something.) 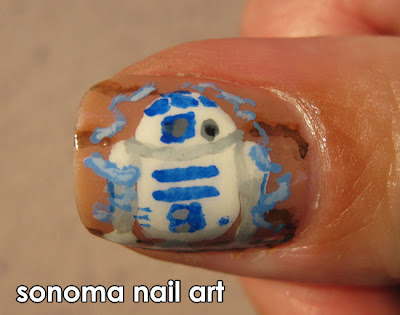 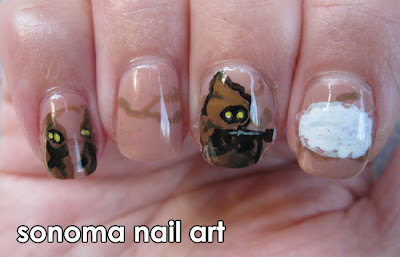 This was done with my non-dominant hand, so it's not quite as awesome as the Ewok nails. I still think it turned out pretty good. I used Wet 'n Wild Megalast "Private Viewing" for the base color, acrylic paints for the art, and topped it all with Sech Vite topcoat. 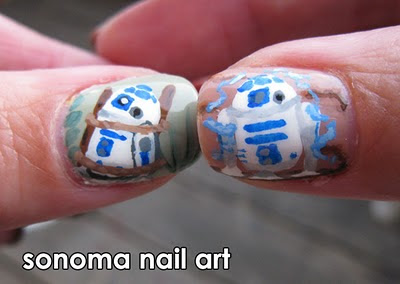 Poor R2D2. He seriously gets picked on in the Star Wars movies. He nearly gets eaten on Dagobah, and darn near burns up when accessing the power grid on Cloud City. 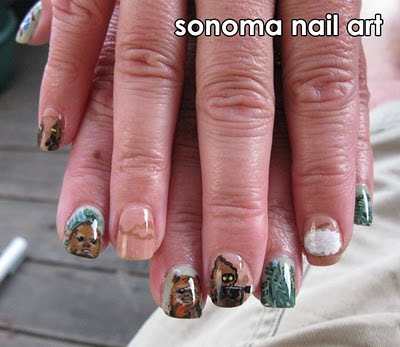 \
Here are the Star Wars nails together. Ewoks and Jawas: they may look cute, but don't let your guard down! May the Force be with you!
Posted by Sonoma Bento at 2:40 PM