Today's theme made perfect sense as a Halloween manicure. Half moon manicure designs were apparently popular in the 1920s and 1930s. I think they are a big pain in the butt. LOL. Seriously, this was the hardest manicure that I have done so far. 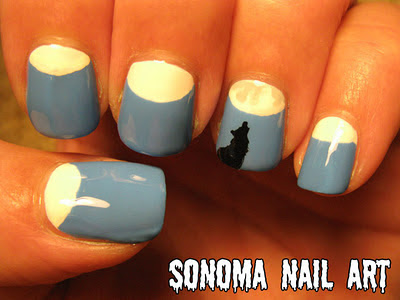 A fairly simple design, with a wolf howling at the (half) moon on my ring finger. Aaahwooooooo! 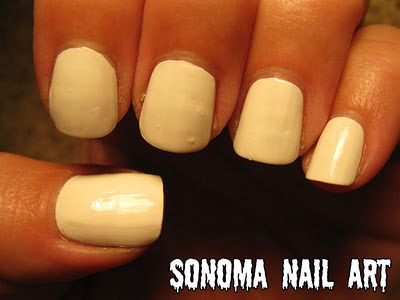 I started with a white polish base. Then I totally messed up by trying to free hand the half moon design in a dark, glass flecked blue. It was way too dark, and also my lines for the half moons were TERRIBLE. So I started over, and took everything off of my left hand, and slapped some more white polish on. 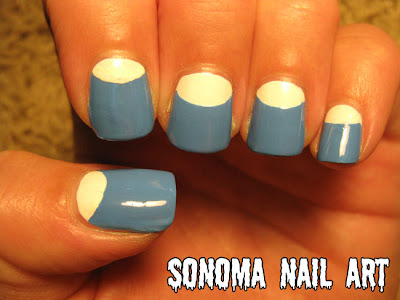 I dug around in my office supplies until I found reinforcement stickers, and used those to mask the moon on the nail and painted this lighter blue on instead. Sheesh. Even then, some of my lines were not clear, and some were too small or two big. Arg! 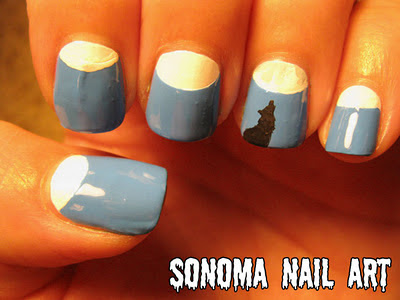 I painted this little wolfie on my ring finger and then added a bit of grey to the white half moon to mimic the markings on the face of the moon. It's not exact, but gives a feeling of the colors of the moon. 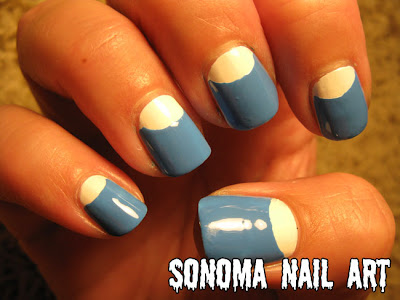 Here's my right hand. It was a pretty mani, very simple, but sometimes simple can be the most difficult. 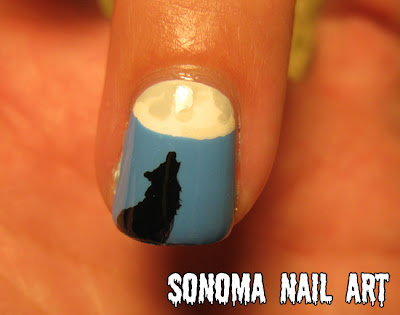 Close up of my little wolf. He even has chest hair! (I guess he can't be Jacob, since Jacob has no chest hair. Hubba hubba.) 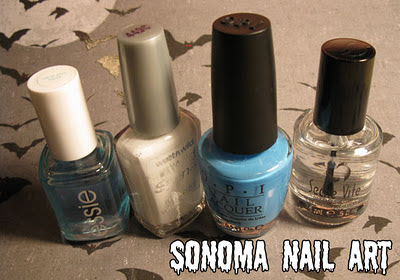 Polishes used in this manicure: Essie All In One basecoat, Wet 'n Wild French White Creme, OPI No Room For The Blues, and Seche Vite topcoat.
Tomorrow it is galaxy nails! Yay!
Posted by Sonoma Bento at 2:08 PM