This is probably the goriest of the nails I will do during this challenge. I like Halloween for its sense of fun, magic, and nostalgia. I am not into gore and serious scary stuff. In fact, I just had to go through a haunted house for a story I am working on, and it was not a pleasant experience. My heart was racing when I finally got out of there! So here is a creepy manicure featuring a creepy dude: Freddy from A Nightmare on Elm Street! 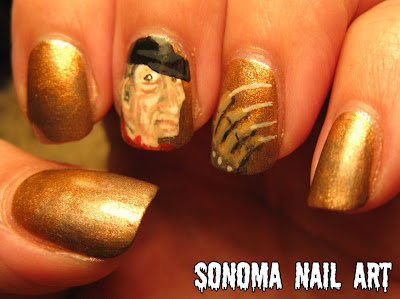 I thought about doing Saw nails, since there are lots of rusty metallic implements used in the Saw movies, but I honestly just hate those movies, and I couldn't bring myself to do it. So I thought about it some more, and remembered that Freddy Krueger hangs out in dirty warehouse/boiler room types of places where there's lots of rusted dirty metal things. 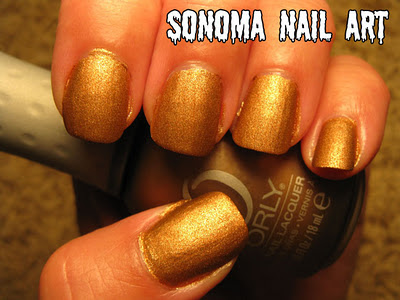 I started with a base of Orly Glam Rock, a matte gold shade. This photo shows the base color before I did any cleanup. 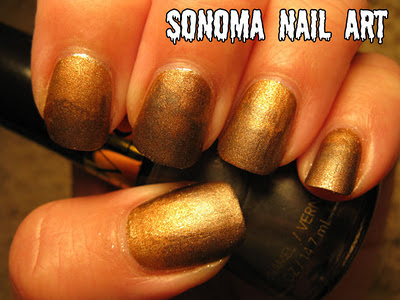 Then I sponged Revlon Steel-her Heart (which when you think about it, is a kind of gruesome name for a Halloween manicure!) over the ends of each nail to give it a dirty appearance. 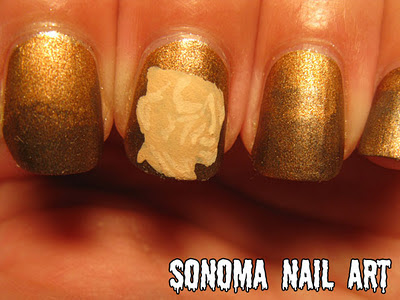 Here's the beginning of Freddy Krueger. (And I used a pic of Robert Englund as Freddy as my model, not the new Freddy as played by Jackie Earle Haley.) 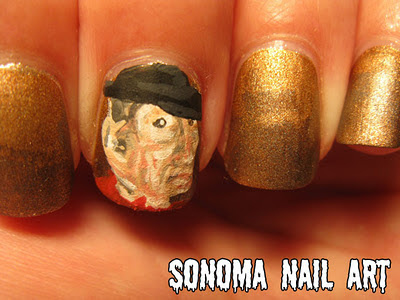 Here is Freddy almost done. His ear got kind of out of control. I should have worked on that a bit more... 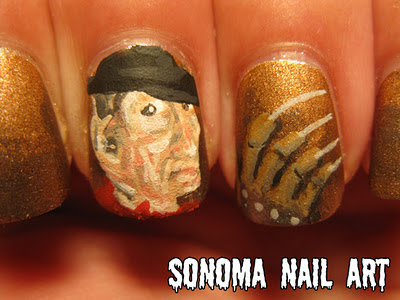 Then I added his glove on my ring finger. I used gold paint mixed with a bit of black paint for the fingers, and silver for his razors. Creepy! 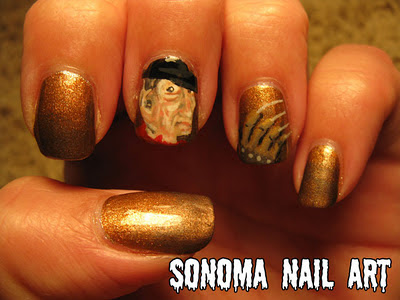 If I scratched myself while wearing this manicure, wouldn't that be weird? Like Freddy was somehow possessing my manicure??! You see why I can't handle haunted houses? My imagination is way too vivid. 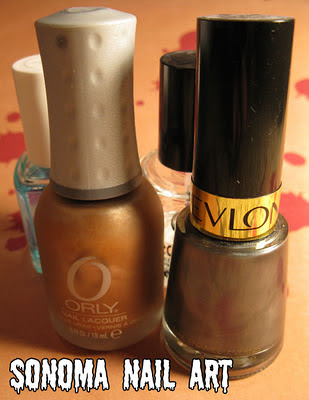 Polishes used in this manicure: Orly Glam Rock, Revlon Steel-her Heart, Essie All In One Basecoat, and Seche Vite Topcoat.
Tomorrow it's rainbow nails! How in the world will I work Halloween into rainbow nails? You'll have to come back to find out!
Posted by Sonoma Bento at 8:16 AM