Again during this challenge, I was a big stumped as to what to do for a particular style. Stripes could be the stripes on a witches stockings, totally fun. But I wanted to do something I hadn't seen before. I remembered that one member of the Addams Family always wore stripes, so that is my manicure today: Pugsley Addams! 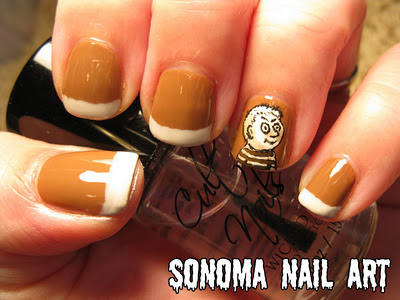 I based my Pugsley on a drawing made by Charles "Chas" Addams, the cartoonist who originated the character in New Yorker cartoons in the 1930s. Originally, Pugsley did not have a name, he was just a member of this odd family that Addams came up with. The family was a satire of the American Ideal Family, and they loved the macabre and bizarre, and didn't understand why other people would think they were weird.  Pugsley only got a name when a television studio bought the rights to the characters and named them The Addams Family. 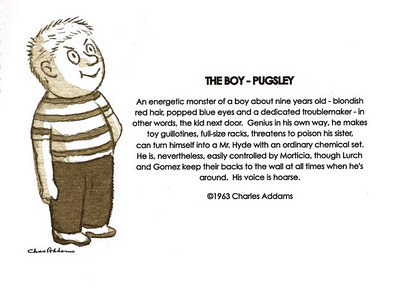 Here is a drawing and description of Pugsley created by Chas Addams in 1963 for the creators of the television series. This is what Addams says about Pugsley:
The Boy - Pugsley
"An energetic monster of a boy about nine years old - blondish red hair, popped blue eyes and a dedicated troublemaker - in other words, the kid next door. Genius in his own way, he makes toy guillotines, full-size racks, threatens to poison his sister, can turn himself into a Mr. Hyde with an ordinary chemical set. He is, nevertheless, easily controlled by Morticia, though Lurch and Gomez keep their backs to the wall at all times when he's around. His voice is hoarse." Charles Addams, 1963 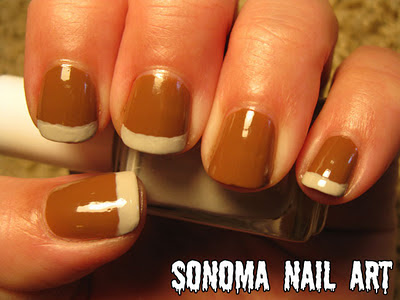 I started with a brown manicure (which my annoying hubby insists are "poop" nails) and added an off white french tip to all of the nails except the ring fingers. 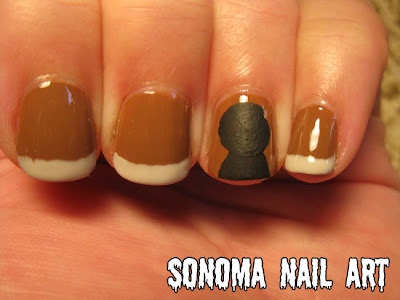 I started Pugsley with a black background, since he is depicted as a cartoon, and it is easier to start with black and paint up, than to try to painstakingly outline in black afterwards. 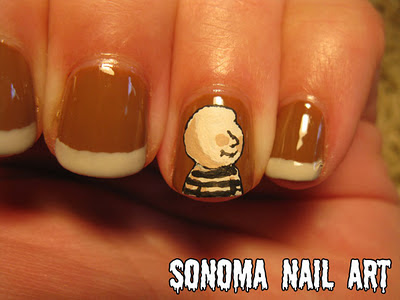 I mixed off white colors in acrylic paint for the flesh and shading of Pugsley. I am very happy with how the colors and feeling really matched Addams' drawing. 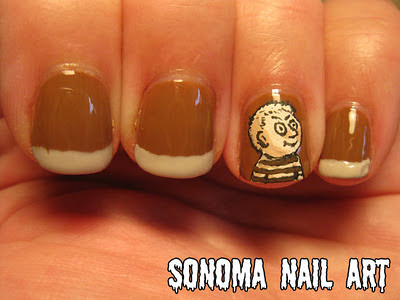 Here's the scamper before I topped him with top coat. Oh! And I can't believe I haven't mentioned my stubby nails! I had two nails break when I was getting my Halloween decorations out of storage. Boo! So I cut all of my nails down and now I just have to wait for them to grow back out. 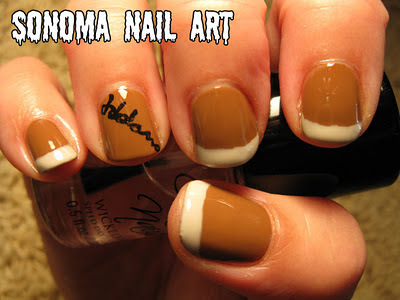 On my right hand, I copied Chas Addams' signature. It didn't quite fit on my stubby nail, but it is really close. 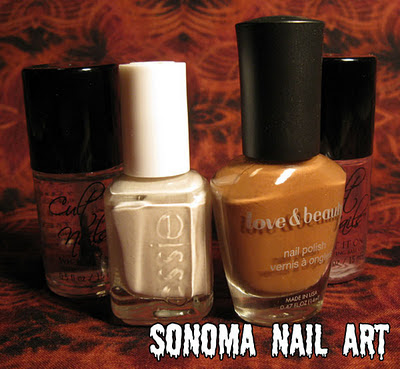 Polishes I used in this manicure: Love & Beauty in Cocoa, Essie Body Language, Cult Nails Get It On basecoat, and Cult Nails Wicked Fast topcoat. (I actually wore this manicure for two and a half days because I loved it so much! And I noticed no chips, just slight wear on my nail tips. Yay for Cult Nails base and top coats!) 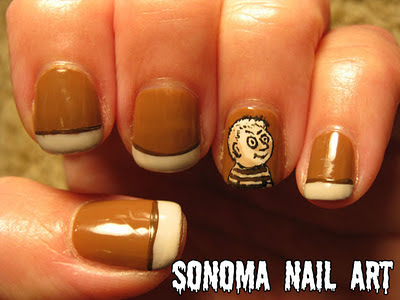 I realized that I did not have a lot of stripes in this "Stripe" manicure, so on the second day I wore this manicure, I added a darker brown stripe (Revlon Chocolate Truffle) with a striper brush along the edge of the french manicure. I really like how it looks!
Tomorrow is Animal Print! I can't wait!
Posted by Sonoma Bento at 1:45 PM