Another quick post today, so busy! I chose the song "I Put A Spell On You" for my inspiration. Specifically, the version performed by Screamin' Jay Hawkins. Screamin' Jay was crazy! He used to come out on stage in a coffin, and emerge from the coffin to perform for the audience. He also had a lot of voodoo props including a smoking skull on a stick called Henry. Crazy! And he was prolific, er, productive, um, maybe procreative? After his death a website was set up called Jay's Kids to find out how many children might have claims on his estate, or be the offspring of the performer. He had at least 55 kids, perhaps as many as 75 or more. Therefore, I give you my tribute to "I Put A Spell On You" a la Screamin' Jay Hawkins... 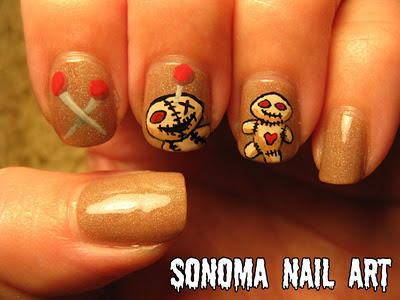 Little voodoo babies with voodoo pins! I started with one coat of the butter LONDON polish, sponged on some Sally Hansen in a brownish coat, then topped with more butter LONDON. The butter LONDON is more opaque than I had anticipated, but there is a bit of interesting depth to the polish. 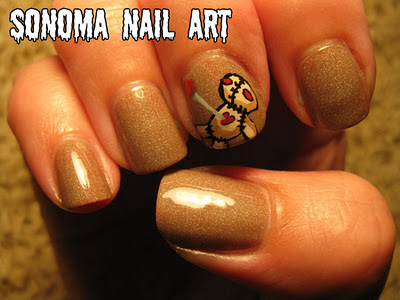 My right had with a voodoo baby. He's got a pin right through his little heart. Someone definitely is putting a spell on him. 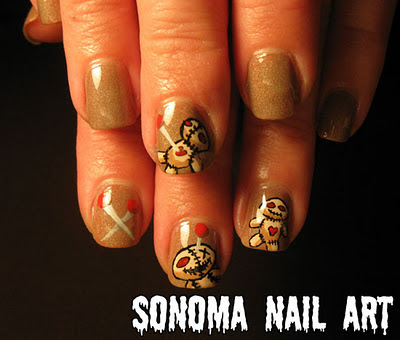 Both hands together. I just love how this mani turned out. The voodoo baby dolls remind me a bit of the freaky character from the movie Trick-or-Treat. 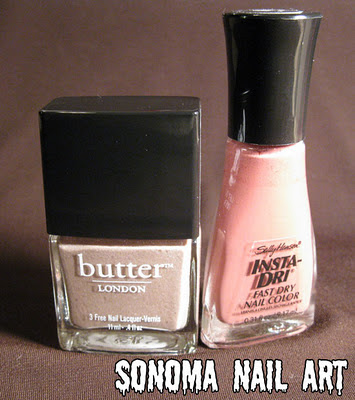 Polishes used in this mani: butter LONDON All Hail the Queen, Sally Hansen Insta-Dri Expresso, Cult Nails Get It On basecoat, and Seche Vite topcoat.
Here's Screamin' Jay's version of the song. Totally awesome!
Tomorrow: nails inspired by a movie. I can't wait!
Posted by Sonoma Bento at 12:54 PM