The pressure was on to really do a good job on this manicure. I live in Sonoma County, California, the home of Charles M. Schulz. Yeah, that Charles M. Schulz. Snoopy, Lucy, Linus, and good ol' Charlie Brown. I have had the honor of broadcasting from the Charles M. Schulz Museum, as well as conducting interviews with Sparky's son, Craig, on occasion. The Schulz family is really involved in our community, and we have lots of Peanuts statues all over town. So I knew I had to really hit this one out of the park. 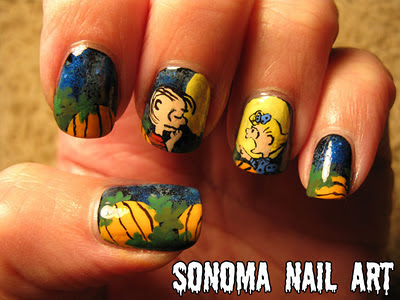 It's Linus and Sally in the pumpkin patch from "It's The Great Pumpkin, Charlie Brown!" This was such a fun manicure to do, and really came out as I hoped it would. 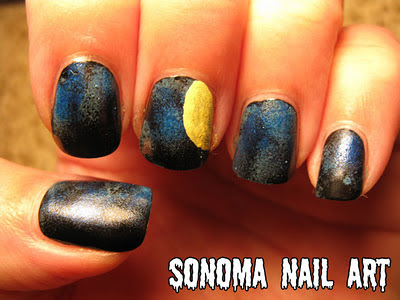 I wanted to capture the amazing backgrounds that are in the film (which was made as a TV special back in 1966), which you should really check out the next time you watch this Halloween classic. The backgrounds during Snoopy's imaginary trip to France are especially evocative. This scene has an almost galactic expanse of sky behind Linus and Sally, perhaps reflecting Linus' unlimited imagination and unwavering faith in The Great Pumpkin. Or, maybe it is just pretty. :) I sponged two different blue polishes over black polish to get this effect, then added a few minuscule stars here and there with acrylic paint. 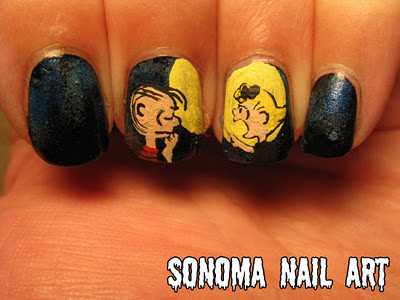 Here you see Sally, Charlie Brown's little sister, completely chewing out poor Linus for duping her into spending Halloween night in the pumpkin patch instead of having fun at "Tricks-or-Treats!" I thought this might be easier to do than some of the more realistic portraits I have been trying, but the economy of line in Schulz' drawings is so amazing. Every little nuance and emotion in so few simple, but perfect, lines. It's really hard to do it right. I hope I came somewhat close. 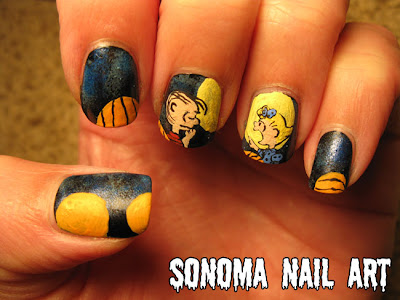 I added the lovely pumpkins and the rest of the details on Linus and Sally next. I am so happy with how these turned out! 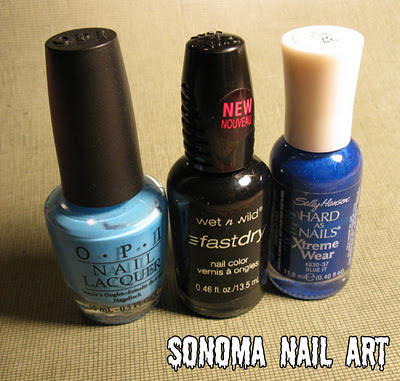 Polishes used in this manicure: Wet 'n Wild Fast Dry in Ebony Hates Chris, OPI No Room For The Blues, and Sally Hansen Xtreme Wear in Blue It. I also used Cult Nails Get It On basecoat and Seche Vite topcoat. 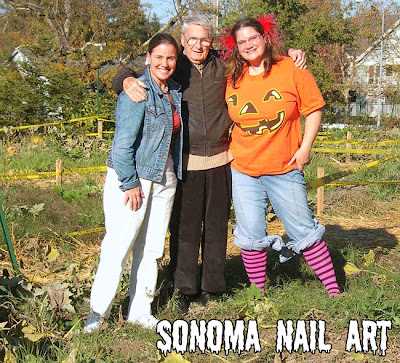 One special Peanuts-related memory for me was a broadcast outside of the Charles M. Schulz museum right before Halloween 2005 (it might have been 2006). I was producing for Marcy Smothers and her special guest was Linus Maurer. Linus was long time friends with Schulz, and a fellow cartoonist. Schulz based his character Linus Van Pelt on his friend Linus Maurer. Linus (the real one) always keeps a blanket/jacket in his trunk, a habit from old days in Minneapolis where he met Schulz. Linus also told us during this broadcast that he hands out packages of peanuts at Halloween. How awesome is that!? This is Marcy, Linus, and myself (I'm the goofball in the jack o'lantern t-shirt) waiting in the pumpkin patch for The Great Pumpkin.
Tomorrow I will be back on schedule with nails inspired by fashion. Happy Halloween!
Posted by Sonoma Bento at 4:51 PM